There is no doubt that COVID-19 has changed our world. Sickness and hardship have negatively impacted families across the world, but Carpenter Nature Center is working hard to try to bring some joy to people’s lives. Although this pandemic has created many obstacles, we are doing our best to respond with positivity and creativity.

The Safe-at-Home Youth Birding Competition proved to be a fun, educational, uplifting opportunity for dozens of families. In total, 48 teams participated in the competition.

The make-up of teams was diverse regarding age and geographic location. While most teams were located in Minnesota and Wisconsin, there were participants from Iowa, North Dakota, Missouri, Idaho, and California! Many teams consisted of members of the same household, but some teams included participants from across town, across the state, and even across the country. 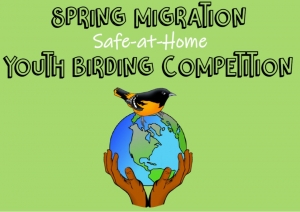 The Loony Larks were from Minnesota and North Dakota.

The Wandering Warblers consisted of children from Minnesota and Iowa.

Interstate teams resulted in list with birds that are not native to the St. Croix River Valley. For example, The Kostkas, some of which were bird watching in Idaho, saw California Quail, Bullock’s Orioles, and Black-billed Magpies.

Children of all ages AND adults enjoyed birding during our competition, and did their best to contribute however they could:

“My two-year-old basically spent the day shouting bird every time she saw one, and my five-year-old surprised me. She self-identified at least half of these without help, including a nuthatch.” – Jay – Team Higgins

“My daughters bird watching consists of ‘mom/grandpa what’s that one?’ or ‘What was that? Did you hear it? It sounded like…(proceeds to make a noise that actually sounds nothing like what she just heard)’ She does this over and over and over all day long! She has a few bird books, so we try to get her to match it to a photo in her books since she can’t read. But she points out anything she sees flying.” – Laura – Team Kostkas

“[The kids] ended up really enjoying it, and it got my husband and I really interested in what was going on in our yard too!” – Emily – The Hudson Bluebirds

“My oldest definitely got some lifers yesterday. The youngest one did great, as suspected, with pointing out the ducks.” – Steph – The Loony Loons

Even non-human family members assisted with locating and identifying birds!

“The German Shepherd alerts us to owls… All night…..” – Alicia – Team Daffy Duck

In order to keep track of the species and numbers of birds sighted, teams used a variety of methods for recording their finds: 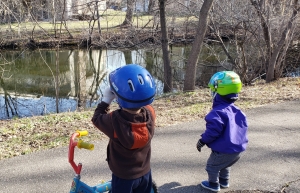 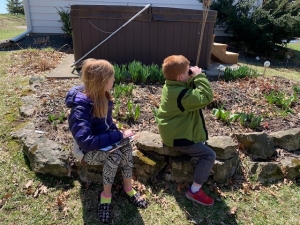 Medicine for Prairies
Scroll to top