You are here: Home1 / Plan Your Visit2 / Meet Our Animals3 / Axolotl

Learn About Our Axolotl

Carpenter Nature Center’s axolotl was donated by the Rasmussen Family in December of 2020.  The Rasmussen Family has always had a love of salamanders. When their son showed an interest in axolotls, they decided to raise them as a homeschool science project. 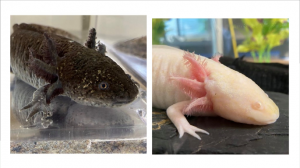 CNC’s Axolotl was purchased from a reputable breeder; because of this, we have detailed information about his history. Pictured above are the parents of the ambassador Axolotl. The male (left), is a melanoid morph. The female (right), is a leucistic morph.

CNC’s Axolotl is considered a “wild morph” because its pattern is similar to those found in the wild. The term morph is short for morphology and refers to the color pattern of a species. Axolotls have become popular in the pet trade and include five different morphologies including, wild (brown to green), leucistic (white body with pink gills), albino (white with red gills), golden (golden body and gills with golden flecks), and melanoid (black). Axolotls are often the subject of scientific research due to their amazing ability to regenerate limbs, tails, lung tissue, parts of the brain and spinal cord.

The Rasmussen Family decided to donate one of their axolotls to CNC as an ambassador for their species. It will teach thousands of visitors every year about endangered species and the importance of habitat protection. Although Axolotls are not native to the Midwest, they are similar in appearance mudpuppies (the juvenile stage of the tiger salamander) and are a great teaching-tool in understanding the life cycle of salamanders native to Minnesota. CNC’s axolotl will live a very comfortable life with humans, as it will be provided with all the food it needs, medical care, and safety from predators.

Axolotls are listed as critically endangered. Wild populations are nearly extinct due to the introduction of predatory fish and habitat loss. Already extirpated from lake Chalco, only a few scattered populations remain in Lake Xochimilco near Mexico City, Mexico. Nearly all captive populations can be traced back to 33 specimens that were shipped from Xochimilco to Paris in 1864. Axolotls have gained popularity as the campaign to save their wild populations has gained traction worldwide.