You are here: Home1 / Plan Your Visit2 / Meet Our Animals3 / Crested Gecko

Learn About Our Crested Gecko

Carpenter Nature Center’s Crested Gecko was donated by Angel’s Pet World in Hudson, Wisconsin. When she arrived at CNC in February of 2020, she was a little over a year old. 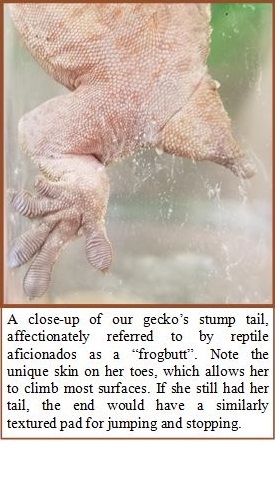 As a very young lizard, this gecko dropped her tail. It is fairly common for geckos and other lizards to leave their tails behind when startled. However, unlike many other species, Crested Geckos do not regrow the appendage. This does not harm the animal in any way (except making them somewhat unsteady jumpers for about a week while they adjust), but did seem to hinder customer interest in purchasing her. After nearly a year of living at Angel’s, it was decided she would have better luck acting as an ambassador animal at CNC.

These geckos were once believed extinct in the wild until their rediscovery in 1994. Since then they’ve become quite popular as pets. Only a few scattered populations of Crested Gecko exist in the wild, and it’s likely that all current captive geckos are descended from one population from the Isle of Pines region in New Caledonia.

Crested Geckos are considered vulnerable by the IUCN. Because their natural range is so small, they’re highly susceptible to habitat disturbances. Very little formal research has been done on the current size of the wild population, but like many endemic species in the region, it is presumed that the number of wild individuals is declining.