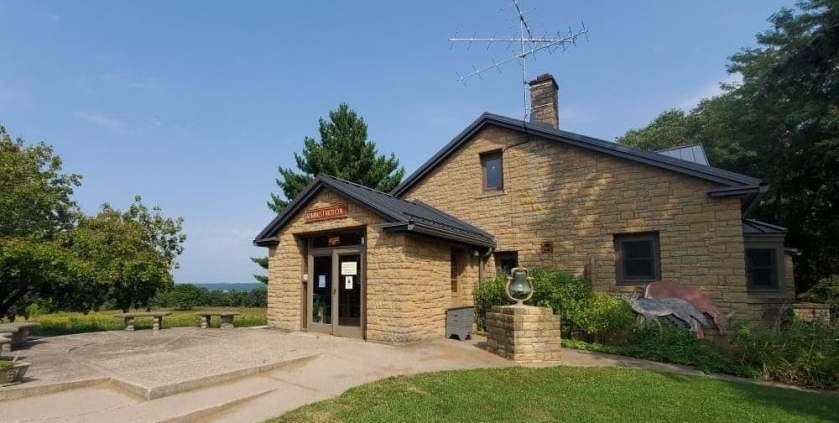 This article originally appeared on St. Croix 360’s website. You can read it on the site here.

A prickly antenna at Carpenter Nature Center along the lower St. Croix River represents a big step in better understanding the wildlife that travel through this area. The device is the first addition in the St. Croix Valley to a global network that lets scientists track birds — or even large insects.

The antenna can detect signals more than 12 miles away from animals fitted with “nanotags,” tiny transmitters that scientists affix to small birds, monarchs, and even dragonflies.

Carpenter’s new antenna is part of the Motus network, a Canadian effort which boasts nearly 1,000 receivers around the world, providing valuable insights into wildlife and conservation. This web of antennas is letting researchers follow animals in ways that have never before been possible.

Any researcher can place nanotags on their study creatures and let them loose again. They pay small fees to the network to register the tags. The animals are then automatically detected if they pass near a Motus tower, and the times and locations are shared. If it passes enough receivers, a detailed picture of a bird’s life can be observed.

Carpenter sits in the center of North America next to two major migration routes, meaning the new tower could be a very important part of the network.

“Our tower, strategically located at the confluence of the St. Croix River and Mississippi Rivers, is listening for nanotags along one of the busiest migration flyways on our continent,” says Jen Vieth, Carpenter’s executive director.

The Motus network is changing the possibilities of tracking wildlife, and is being used by many researchers already. This international network hopes to someday blanket large swaths of the Western Hemisphere with antennae, ensuring almost all tagged creatures that pass through will be detected.

With enough of these towers, a bird tagged in its breeding habitat in Canada, for example, could be tracked all the way through the United States and on to its wintering grounds in Costa Rica.

This provides invaluable information about migration strategies, what kinds of habitat it depends on throughout its life, and threats to its survival wherever it roams.

The Minnesota Ornithologists’ Union, a statewide organization dedicated to studying birds, provided a grant to fund much of the project, excited by the possibility of Motus eventually covering the state.

“I thought funding would be the biggest challenge,” Vieth says. “But I was very wrong.”

While she stresses that any committed group could add an antenna to the network, the technology and components can be daunting.

It was only thanks to a dedicated intern (and his father), partners with the Minnesota Department of Natural Resources, the Natural Resources Research Institute, volunteers, and others that the tower was finally finished.

The series of challenges began with the complex technology. The intern and his dad were essential to figuring all that out. Once they knew what they needed to buy, they had to order some of it from the United Kingdom — but the charge on the nature center’s credit card was repeatedly misidentified as theft, and rejected.

The obstacles were only beginning.

When Carpenter finally acquired all the materials, the roof where they wanted to install it started leaking. It needed to be replaced, and then asbestos was discovered in the shingles. An abatement company was called in to safely dispose of the harmful material.

Finally, just when the roofing company got started working, the workers were called away to another project. The replacement ultimately took six months.

This March, the roof was finally finished and the frame that would support the Motus tower was installed. The team was ready to hook up the antenna — then came the coronavirus pandemic, halting progress.

Finally in June, after restrictions were eased, with the help of volunteer Ben Douglas, the tower was installed. Then Douglas spent many hours troubleshooting the system until July, when the tower was confirmed to be operational.

Despite the difficulties Carpenter encountered, Vieth says almost any group of committed people can deploy a new antenna and start feeding detections into the database.

“What’s amazing about Motus is that even small groups can get involved in installing ‘listening’ towers. You don’t need to have a bird banding license to do it,” Vieth says. “The tech is tricky, but more and more volunteers are learning how to support the system. Schools, nature centers, even individual homeowners could put up a tower if they had the funds and tech support.”

Volunteers have been banding birds at Carpenter for almost four decades, capturing them with large stationary nets and affixing tiny numbered bands to their legs, then setting them free again. This widespread practice by licensed bird banders has contributed enormous insights to ornithology for more than 50 years.

But banding takes a lot of time, and it’s limited in what it can tell researchers. Only a fraction of banded birds are ever documented again.

Learning anything about a banded bird’s travels requires recapturing the bird or otherwise observing the band — by another bander, a citizen who knows how to report the band, a or by capturing the bird again at the original banding site. The band number is then reported to a central database.

Even then, only a few dates and location for an individual bird can be recorded over its lifetime.

“The data gleaned from one bird’s [Motus] track provides much more detail that we’d get from one band recovery,” Vieth says.

The long history of banding at Carpenter and elsewhere makes Motus even more valuable, as it will build on previous knowledge.

Motus in the Midwest

The Motus network has the potential to be a revolution in ornithology and other wildlife studies.

“The technological advances involved in nanotech will allow very small creatures to be tagged and passively monitored as they pass by towers that are listening 24 hours a day, seven days a week, 365 days a year,” Vieth says.

While Motus is already widespread on the East Coast, covering most migration routes, it’s just becoming feasible in the Midwest. As more researchers in the region start using nanotags, and more antenna are installed, more and more migrators will pass by and be detected.

The Carpenter tower has detected three passing birds so far. One of the passerine passersby is a good example of the power of Motus, Vieth says.

On Sept. 18, the antenna picked up the signal from a blue jay that had been tagged in Grand Marais, along the North Shore of Minnesota, just two weeks earlier. The bird was tagged by the University of Minnesota-Duluth’s Natural Resources Research Institute. Dr. Alexis Grinde has deployed 10 towers along Lake Superior’s western end in 2018 and one more this spring.

Now the blue jay was headed south for the winter. Motus is the only way researchers could have known when and where it went.

“This bird did not stop at Carpenter, as it simply flew over the site while en route to its winter destination,” Vieth says. “That blue jay wouldn’t have been recaptured in our nets at all, meaning it would have passed by undetected.”

Another blue jay tagged in the same study two years ago was tracked for almost the entire month of March by a receiver in Indiana, showing where this bird depended on safety and food to survive between breeding seasons.

“Now we know that this jay relies on specific breeding grounds up north, and has a specific wintering site in Indiana,” Vieth says. “If this were an endangered species, we’d now know about two particular sites to focus on in protecting the species.”

Vieth hopes that someday, Carpenter will deploy its own nanotags on birds, monarchs, and migratory dragonflies. For now, they’re excited to join the detection effort.

More towers are soon to come in the upper Midwest. Groups across the region, like the U.S. Fish and Wildlife Service, Midwest Migration Network, and Minnesota’s and Wisconsin’s DNRs, are currently deciding how towers should be prioritized in the region.

“For example, we know most migrating birds more from north to south and back again, so this group has a goal of a virtual ‘detection wall’ across Minnesota,” Vieth says. “That way migratory species moving through Minnesota would hopefully be detected along this latitudinal line.”

Carpenter is currently raising funds to install a second tower along the lower St. Croix, at its Wisconsin campus south of Hudson. The project has been partially funded by Tropical Wings, but needs about $2,000 more. They hope to deploy it be next spring migration.

Vieth hopes it will add a lot of detail to how birds move along and around the river — and where they spend the winter.

“Adding the Wisconsin tower will help elucidate information on the St Croix River bird movements, which is an exciting prospect when think big picture,” Vieth says.

The Saint Croix National Scenic Riverway formed a sister park relationship in 2013 with Costa Rican national parks, based primarily on the connections created by migrating bids that breed along the river and spend the winter in Central America.

Vieth says the Motus towers could finally show this relationship in detail.

“It would be amazing to be able to detect migratory connectivity between the two sister parks!” Vieth says. That possibility is also why Tropical Wings is supportive, as the organization exists to study, celebrate, and protect the migrants that travel between the St. Croix region and Costa Rica.

The more towers, the more scientists will be able to learn about the incredible journeys many wild animals undertake. For now, the antenna on top of Carpenter’s offices will be listening all day and all night, waiting for another signal from creatures carrying tiny transmitters.

To learn more, check out Motus’ website by following this link, and watch the video below