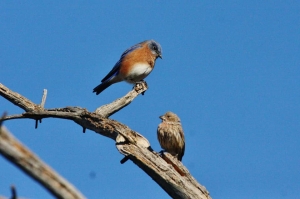 In Wisconsin, the song of the Eastern Bluebird is a harbinger of spring. Their brilliant plumage ushers out the harshness of winter and reminds us that summer is just around the corner. Bluebirds prefer open areas such as native prairies, agricultural land and even neighborhood parks. This makes the Carpenter Nature Center’s Wisconsin Campus a great place to spot Bluebirds! They are skilled insect hunters, mostly feeding on caterpillars, beetles, crickets and grasshoppers. Often seen perching on fence posts or an overhanging branch, bluebirds can spot their prey from over 60 feet away!

Did you know that Eastern Bluebirds were once at risk of disappearing? In the early 1900s loss of nesting habitat and competition from other cavity nesting birds led to significant population decline. Then in 1986, the WI DNR called upon conservation groups to help save the species. This led to the formation of the Bluebird Restoration Association of Wisconsin (BRAW) and the artificial nest box program was hatched. Examples of these artificial nest boxes are found along the Wisconsin Campus trails. These nest boxes helped restore Bluebird populations, soaring to historic numbers. Maintaining Bluebird houses is one way Carpenter Nature Center provides habitat for native species while bringing an educational experience to our visitors.

Due to the success of the Bluebird Restoration Association of Wisconsin (BRAW) and many conservation-minded groups around the country, Minnesotans and Wisconsinites are able to enjoy the Eastern Bluebird every spring. You can be apart of their success by building your own bluebird house with these printable DIY Bluebird house plans. There are two plans, ranging in difficulty but both are great for attracting Blue Birds. 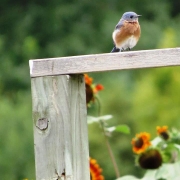 Follow these tips and tricks below to attract Bluebirds to your freshly built house!

Nature at Home: What Happens When It’s Spring?